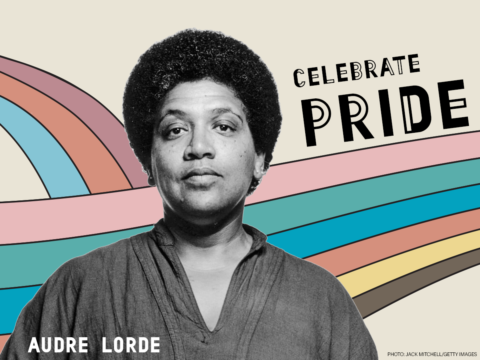 The self-proclaimed Black feminist, lesbian, poet, mother, and warrior Audre Lorde (1934-1992) was a native New Yorker and daughter of immigrants. Both her activism and her published work speak to the importance of struggle for liberation among oppressed peoples and of organizing in coalition across differences of race, gender, sexual orientation, class, age and ability.

Audre Lorde centered the experiences of Black queer women in her poetry, essays, and activism and has come now to be known as one of the most influential and powerful contributors to feminist theory, critical race studies, and queer theory.

Audre Lorde gave power to Black feminism and Black queerness in the selected poems “A Woman Speaks”, “Coal”, “Movement Song”, and “Recreation”, while channeling her rage into powerful movement building prose inspired by anger and grief in “Power”, “Afterimages”, “Sisters in Arms”, and “A Litany for Survival”.

Audre Lorde is a relevant inspiration today, nearly three decades after her death, because she empowers us as individuals and people with intersecting identities to stand up and speak out – not just for racism, heterosexism, sexism, ageism, or ableism – but also for one another. The liberation of all from the oppressive societal structures and systems requires a collective imagination and community-based collaboration from all.

In solidarity: bodily autonomy is economic justice and a civil right

Get Out the Vote