“My passion both personally and professionally is to serve Indigenous folks in the Pacific Northwest to the best of my ability. I value genuine relationships, partnerships, and of course a good meal shared between friends.” 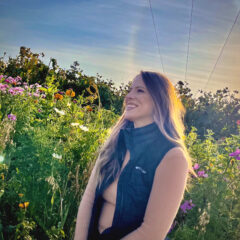 We are thrilled to announce our most recent hire on the Food Access Network team: Anna Olson! Anna brings with her a deep well of personal experience – she is a first-generation descendant of the Confederated Salish and Kootenai Tribes. She spent her childhood on the Flathead Reservation in Western Montana, and her early experiences solidified her passion for serving Native communities. Prior to joining the Northwest Harvest team, Anna worked in statewide legal aid outreach and has a background in crime victim advocacy and prevention.

Anna’s work is guided by a genuine and intentional belief in the value of giving back to folks in Indian Country. She knows it is important to humanize people and avoid the trap of either romanticizing or demonizing them. Anna believes that we should always serve communities with respect, not reverence. People do not need to be perfect to be worthy of support.

Northwest Harvest is excited to have Anna on the team and looks forward to continuing to improve the services we provide for all communities.

“I never imagined that this is what I would be doing, but it has become a gift, to me and to my Community.”

– Roxana Pardo Garcia, Executive Director and founding member of Alimentando al Pueblo, the only Latinx food bank in the country 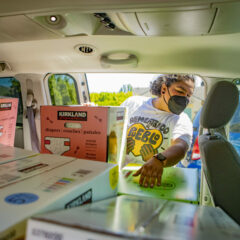 Alimentando al Pueblo, which translates to “feeding the people,” started in 2020 during a wave of energy around mutual aid networks during the beginning of the pandemic. Roxana knew, as many people of color predicted, that marginalized communities would be disproportionately impacted by COVID-19. She heard her aunt talking to her mother on the phone about how uncomfortable she was going to food banks, and they often provided food that her aunt couldn’t use.

Roxana knew something had to be done. She, along with four other Latina women including her mother, Hilda, got together to dream up Alimentando al Pueblo to nurture, sustain, and heal her Community through food and celebration.

The founders of Alimentando al Pueblo felt a deep concern for their Community when the pandemic hit – a fear that was compounded by hundreds of years of trauma caused by colonization and systemic racism. There is a kind of knowledge that teaches us that we inherit genetic memories from our Ancestors and Roxana didn’t want future generations to only have memories of pain and loss during this time. She wanted to make sure there was abundance, creativity, joy, and Community. This idea came from the people it was designed to serve and most importantly to Roxana: “we created a viable alternative that is changing the material conditions of our Community.”

Community is at the heart of everything they do. In addition to running a food bank, they also host Community celebrations and programming designed specifically around youth empowerment and mental health. They hire local musicians to play to folks waiting in line for food distribution. They commission local Latinx artists to produce art that people can take home with their food boxes. They host pop-up markets that feature local makers. Roxana estimates that they’ve invested a little over a million dollars back into the local Community.

“Nothing like this exists in the country,” says Roxana, “but what we’re doing is nothing new, it’s an ancestral practice – to feed each other and take care of each other. This is what happens when you let the communities that are most impacted do their thing. This is what community-driven solutions can look like.” 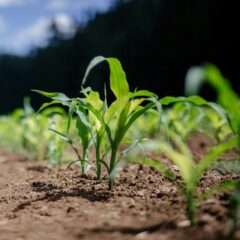 Long before colonization and forced assimilation by white settlers, Native Americans were stewarding land symbiotically with nature. Now known as regenerative agriculture, this 3,000-year-old practice unifies people and nature by working collectively with the surrounding biodiversity to produce food. This practice, now growing in popularity is one of the components in reversing climate change and instrumental in decolonizing American food systems.

Regenerative agriculture not only “does no harm” to the land but actually improves it, using technologies that regenerate and revitalize the soil and the environment. Regenerative agriculture leads to healthy soil, capable of producing high quality, nutrient dense food while simultaneously improving, rather than degrading land, and ultimately leading to productive farms and healthy communities and economies. It is a dynamic and holistic approach, incorporating permaculture and organic farming practices, including conservation tillage, cover crops, crop rotation, composting, mobile animal shelters and pasture cropping to increase food production, farmers’ income and especially, topsoil.

While most commercial agriculture today follows model of “greatest extraction for greatest profit,” Indigenous people fostered a way of farming that was not only beneficial to the environment but also the health and well-being of their communities.

Despite many of these agricultural practices coming directly from Indigenous knowledge, Native voices have been left out of shaping mainstream farming – especially in the increasingly popular shift to produce food sustainably. Despite the fact that Native American communities developed these practices, they still face disproportionally high rates of food insecurity and diet-related disease.

A-dae Romero-Briones (Cochiti/Kiowa), the Director of Programs Agriculture and Food Systems for the First Nations Development Institute, reflects on the lack of representation of Indigenous and People of Color in agriculture:

“What I found is there are not a lot of non-white people in the organic community. When you’re trying to move an entire community of white people and as a non-white person, it is really, really hard and tiring. So, I sit on the board and it helps that I’m a brown face in a very white community. In that sense, I think there is some awareness that there needs to be more inclusion of non-white people in the organic community. I have tried to work on group certification for tribal communities, but again these are systems that are massive, and it takes way more than me to make really lasting change.”

It is important that Indigenous knowledge, practices, and communities are centered in discussions of long-term, large-scale sustainability in the production of food. Decolonizing our food system means acknowledging and honoring the practices of Indigenous People, supporting Native growers, honoring water rights, returning land to Native communities, and promoting movements for Indigenous food sovereignty.

Stories from the Harvest: January 2023

stories from the harvest

Stories from the Harvest: October 2022

stories from the harvest